This guide not yet available in video format.

Local Markets are a Planetary Project, which means they can be built collectively by the inhabitants of a planet. If you want to (help) build one on your planet, please refer to this guide.

Once built, a Local Market will be listed under a planet’s infrastructure: 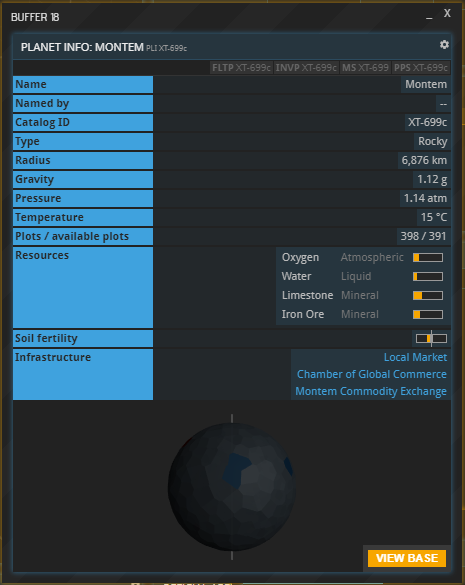 Clicking the entry will open the following buffer. This is where you will be able to see existing ads and post your own: 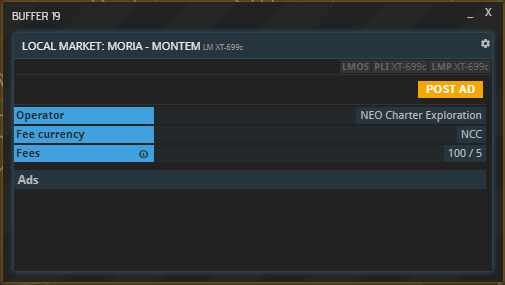 Companies trading on Local Markets have a rating which signals to other parties how likely they are to uphold their end of a deal. Companies are Unrated (“U” symbol) by default; a rating can be obtained by acquiring a PRO license. Once a company is rated, its rating status will be Pending (“P” symbol). Abiding by contracts will result in a higher rating, breaching contracts will lower it. Ratings go from F (worst) to A (best).

A company’s rating can be seen using the CO command:

As an alternative means for exchanging goods, Local Markets come with their own set of advantages and disadvantages. In essence, they work like bulletin boards, which results in a few key differences to Commodity Exchanges:

To place an Ad, first hit “POST AD” and then select the “BUYING” or “SELLING” tab in the overview pictured above, which will open this buffer: 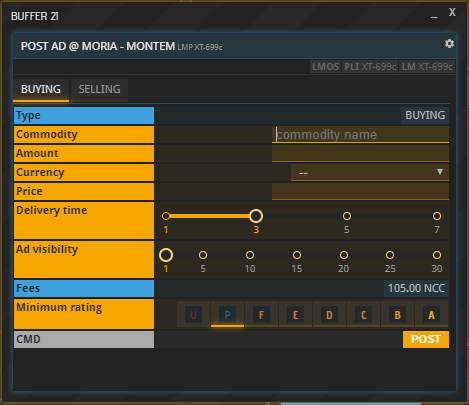 In this example, we are placing a Buying Ad, but Selling Ads work exactly the same. While filling out the form, please note the following:

Once you are done inputting the desired values, hit “POST”: 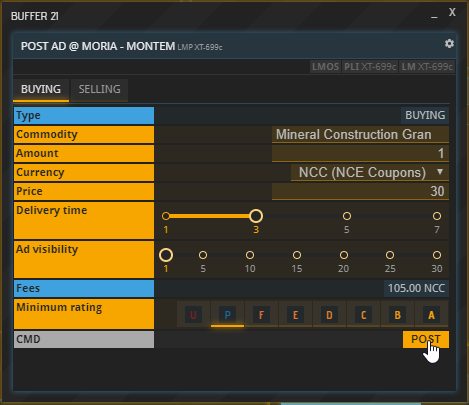 You can now view your ad – and all your other ads – using the LMOS command, the Local Market equivalent to CXOS (for Commodity Exchange orders) and FXOS (for Foreign Exchange orders):

Your new ad will also appear in the market overview for the specified Ad visibility duration. Anyone can accept it at any time before it expires, even if they do not own a base on the market’s planet: 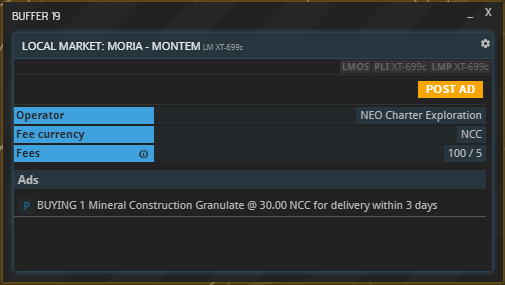 When selected from the list, this is what your ad will look like to a potential trade partner: 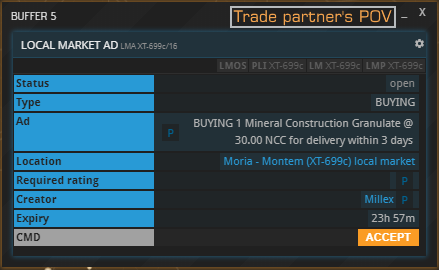 Once they accept it, they can view the details and start fulfilling their end of the deal (or not): 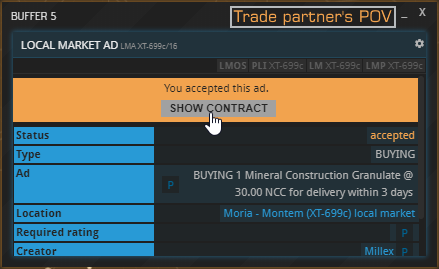 You will receive a notification of your ad having been accepted and a contract will be generated. Just like contracts pertaining to Commodity Exchanges, it will show up in the CONTS buffer:

To fulfill your side of the contract, select it from the list and view the details. If you meet the requirements – i.e. own the money owed or have the agreed upon delivery available at the location –, the “Fulfill” button will turn green. Either party can be the first to fulfill their side of the deal.

Your partner will see the following equivalent on their end:

After one side fulfilled their end of the deal, the contract will turn from “closed” to “partially filled”. Once both sides delivered, the contract’s status will turn to “fulfilled”.

The example above refers to a Buying Ad. Selling Ads work exactly the same, with one notable difference: Once a Selling Ad gets accepted, the generated contract will contain three conditions instead of two. The extra condition (#1) needs to be fulfilled first by the offering party. Doing so will block the specified commodity and it won’t be visible in the inventory anymore but still use up weight and volume. Only then will fulfilling condition #3 become possible and its timer will start running, in this case for three days.

Before the seller fulfills condition #1, their partner will only be able to fulfill condition #2, i.e. pay for the commodity:

Shipping ads can be placed using the “SHIPPING” tab which looks like this: 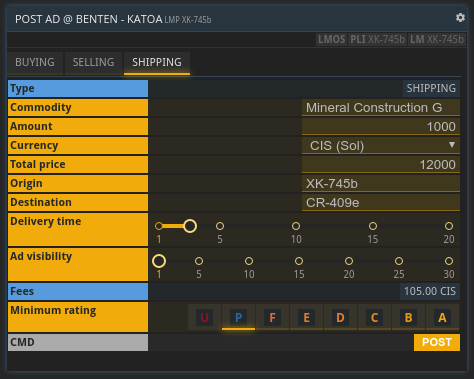 Shipping ads and buy/sell ads have a lot of common fields and there are only two additions:

Shipping ads have to follow two rules to be valid:

Shipping ads are listed just like the other ad types with the key difference that the content of the shipment is not visible: 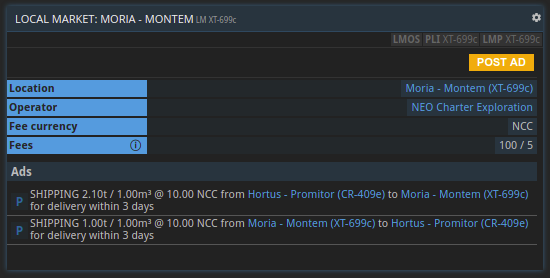 After the ad has been accepted a contract consisting of four conditions is created. Please note that the contract looks slightly different for the principal and the hauler. The principal will see the contents of the shipment while the hauler will not.

Unlike contracts made on Commodity Exchanges, Local Market contracts can be breached by one or even both sides. A breach always begins with a missed deadline, i.e. not fulfilling one’s obligation on time.

If both sides miss the deadline, the contract is void. Both sides keep their wares and money, and their companies’ ratings are barely changed, if at all.

If only one company – company A – fails to fulfill their end of the contract before the deadline expires, their partner – company B – has 24 hours to make a choice: either prolong the contract or mark it as breached.

If they do not react within those 24 hours, the contract will be breached automatically. Breaching it will relieve company A from fulfilling their obligation, but lower their trust rating (see above) in the process. If company B decides to prolong the deadline instead, company B will be granted 24 more hours to uphold their end of the contract. They will of course be notified if this happens:

If company A still does not deliver during the extension period, company B will be faced with the same choice again once the deadline is exceeded. It is possible to prolong a contract indefinitely this way, 24 hours at a time.

If you have a suspicion that an APEX user may be a pirate trying to delibarely breach shipping contracts to capture the involved commodities, or have otherwise had a bad experience with a specific contract partner, you can block them from accepting your LM ads from their USR command (e.g. “USR PirateUserName”).

When a user you blocked tries to accept one of your LM ads, they will receive an rejection message.

Blocked users are listed under the Local Market Blocklist (LMBL) command, where you can also unblock them again.

Different problems can occur when trying to fulfill a Local Market contract.

If company A paid for their commodities, but company B cannot deliver them due to a lack of inventory space on company A’s part, the contract system will register that a delivery attempt was made. This will count (almost) the same as an actual delivery towards company B’s trust rating, even if the commodities are never delivered.

If – for whatever reason – only part of a delivery or payment is made before the order’s deadline, the party which contributed less to their side of the contract will be considered responsible for breaching the contract. For example, if company B paid 100 % of the price, but company A only delivered 50 % of the goods, company B will be the one to decide whether to extend the deadline or mark the contract as breached by company B. (If the partial delivery is due to insufficient inventory space in company B’s base, this will barely affect company A’s rating, as described above.)